i am an american film music composer/musician living in

i compose music for cinema and TV.

hearing some of my music 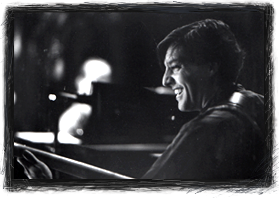 I was born in 1959 in San Jose, California, just south of San Francisco. My father Jim was a postman and a baseball coach, my mother Stella, whose parents had come to the US from Italy, loved accordion and anti-pasti and looked after my brother, my two sisters and me.

One of my earliest memories is lying in the back of our family’s huge 1964 Chevrolet station wagon, with my ear next to the mono speaker listening to the AM radio playing The Beatles, Henry Mancini and Johnny Cash.
My father loved to listen to Elvis and Country and Western music. My mother liked anything with a good melody and lyrics she could understand, like, “Up Up and Away (in my beautiful balloon)”. Although I didn’t know it at the time, I learned a lot about the music they loved just by listening, listening, listening.

Traveling next to me in our car was my brother Ken, who was born two years before me. Ken and I shared our first passion: we loved to invent and build stuff, and were constantly taking things apart in order to understand how they worked.
We started building and modifying toys, games, tree houses, chopper-bikes, forts, and rafts, which we used to navigate San Thomas Creek near our house. On a fateful trip to the enormous San Jose Flea Market we discovered electronics. We bought old radios, record players, tape machines, speakers and parts. It is amazing that we didn’t get electrocuted fixing and modifying these things!

I was a bit too young to understand the 1968 “Summer Of Love”, but I distinctly remember hearing the psychedelic San Francisco sounds of bands like Jefferson Airplane, Santana and the Grateful Dead on the radio and emanating from garages where local bands practiced. This musical environment had its effect on my brother and me, and in 1972 we “got the bug” and both began playing guitar. We decided to form a band and needed a bass player. We bought a bass, formed a band called “Hunangsfall”, whose name we found in a Germanic mythology book, and started making music. That day I decided I would commit myself to learning both bass and guitar, which remain my primary instruments today. I also started to write and record original music for our band, first using our flea market recording machines, and gradually progressing to a four-track open reel machine. In Hunangsfall we played many different kinds of music—inspired by the concerts we were then attending in San Francisco by groups and artists as diverse as Genesis, John Cage, Led Zeppelin, Count Basie and The San Francisco Symphony.
This eclectic musical background served me well when I started writing music for film and television.

Mike Hall, my first brilliant private guitar and bass teacher, exposed me to the inner workings of harmony, melody and rhythm. I became aware of the fact that one could use these structural tools to create moods and stories; that was an epiphany! He also introduced me to diverse artists such as Stravinsky, Herbie Hancock and Bernard Hermann. It is also about that time that I realized that “real” specialized composers actually sat down and wrote those themes to Batman, The Pink Panther and Jaws.
Mike Hall encouraged me to study music, and when I informed my father of my intention to study; he said ‘You’re crazy!’ My mother told him it was a ‘phase’ that I would grow out of. They’re both still waiting for me to ‘grow up.’

Between 1977-1983 I studied Jazz and Classical music at West Valley College and San Jose State University, California. Although I learned a great deal about the mechanics and history of music there, my real education came from playing with great musicians in the booming multi-cultural music scene in San Francisco.

Around 1975 I played my first professional gig, a fashion show in a hotel.
I remember the shows director telling the band that they needed some “Egyptian” music while four men carried in a model lying on a velvet sofa!
The flute player in our band improvised in some sort of Hungarian minor scale and the rest of the band tried to sound Egyptian.

For the next dozen years I made my living freelancing on Bass and Guitar playing Jazz, in Orchestras, Theater music, Circus, Brazilian and Cuban music, Blues, R&B, Funk, Jewish bands, Country and Western, Pop, Rock, Italian polka bands. I played in the orchestra for Film/Theater star Richard Harris in “Camelot”, with the TV stars “The Smothers Brothers” comedy duo, and everything in between.

I also spent several years traveling literally around the world as a musician on cruise ships. The “Ethnic” music I heard on these trips played in China, Africa, Brazil and India widened my musical horizons. I realized that the “dialect” in music is so deep and culturally ingrained, that it was pointless to make a poor copy of it, but rather to attempt to understand its essence and borrow elements for use in my own music. Looking back, I realize that my experience with diverse world music proved to be very useful when for example, in 2008, I needed to write a Jewish theme for the film series “The Wolves of Berlin”.

Two weeks after the fall of the Berlin Wall in 1989 I first came to work in Europe, on tour with a theater orchestra. We had two extended stays in the “Schauspielhaus” theater in Hamburg, Germany, a city I instantly loved. I spent the next four years dividing my time between California and Europe before I finally settled in Hamburg in 1994. I had fallen in love with a Hamburg girl and with the European way of life. I recognized that Germany’s long art and music traditions created an environment in which artists enjoyed a higher level of appreciation and respect than they did in the USA. I wanted to be a part of that.

When I moved to Hamburg my friend guitarist Dylan Vaughn organized an audition for a theater pit orchestra; I got the job. During my time in the theater I met American Jazz saxophone legend Herb Geller, with whom I worked closely for many years. In about 1996 Herb got me involved with the “Norddeutsche Rundfunk Big Band” (North German Radio Big Band), where I had the opportunity to play with many of my Jazz heroes such as Kenny Wheeler, Paquito de´Rivera, Albert Mangelsdorf, Abdulla Ibrahim, Slide Hampton and Michael Gibbs among others. I still play and record as a guest with the NDR today.

In 1999, I studied Composing for Film with English film composer Chris Evans, who was then Professor of Film Music at the Film Institute in Hamburg. Chris helped me grasp many technical aspects of composing and then synchronizing music and film on the computer, creating a musical “sound palette” to give a film an identity, and musical pacing as it relates to the plot.
I then studied in more depth the music of film composers, many of whom had fascinated me as a child. Investigating the music of Bernard Hermann, Nino Rota, Jerry Goldsmith, Enno Morriconni, John Williams, Howard Shore, Thomas Newmann, James Newton Howard, Mark Isham and Carter Burwell helped me to understand the secrets of their unique sound.

Chris Evans also introduced me to young director Florian Baxmeyer, for whom I wrote the music for his 2004 Oscar nominated film “Die Rote Jacke” (“The Red Jacket”). (See Filmography)
This opened several doors and helped me make the transition from player to film and TV composer.
I have had the opportunity to write in many different genres, and every film that I worked on has been an education. In animation films I learned how to create irony, in thrillers, how to build tension, in drama, how to musically depict the mental state of a character.

In film, I believe I have found the perfect platform to unify all my creative interests; writing and playing music in a wide variety of styles, designing and building, working with materials and textures, solving a puzzle, and collaborating with other creative people.

These are the things that I loved as a child. I look forward with enthusiasm to my next project when I will go into my studio to build something new—not with a hammer and pliers, like I did as a child—but with a pencil, collections of instruments and all my recording gear.

play
all music © 2012 edward harris, all film stills property of the production companies